(The following article is adapted from a speech delivered by Angela Wilson, Assistant District Attorney for Douglas County, at the kickoff event for this year’s Sexual Assault Awareness Month activities. CASDA thanks Angela for sharing her important words with us so that we can pass them on to a wider audience!) 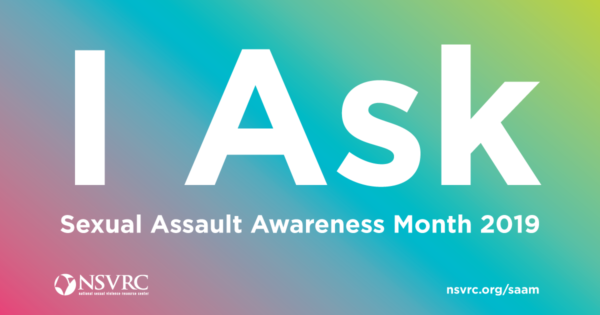 This year’s Sexual Assault Awareness Month theme is “I ask.” Although the statement addresses consent, it also looks beyond the issue of explicit consent to the need for honoring each person we encounter, whether in a personal or professional capacity.

Here are some statistics:

From these statistics, we can conclude that many people we encounter are carrying a heavy load of trauma, often interacting with their abuser in the very place the attack occurred, but also operating in silence and secrecy.

The impact of trauma will leave its mark. This mark can show up looking like something as seemingly “simple” as a fear of the dark, or as profound as severe recurring depression and suicidal thoughts.  A smell of cologne or a sound of a song can spark the terror that remains hidden most of the time.

Survivors of sexual assault experience significant emotional trauma whether the assault is reported or not.  Those who do not report are hidden from us inside the system. The implications of this are tremendous.

For each of the survivors known to the system, there are nine children and six to seven adults whose stories we don’t know.

The people we encounter are often uncounted survivors  – we meet them not in the context of prosecution of the sexual assault but in other capacities.

Prospective jurors for sexual assault trials are asked: “Can you be fair and impartial?” and in more than one case, the adult juror makes the disclosure for the first time in his or her life just because they were directly asked the question: Has this, or something like this, ever happened to you?

Victims of other crime, parents of children who are victims, parents or foster parents in child protection cases: these are just a few of the capacities in the office of the district attorney in which we find survivors of sexual assault.

The lasting impact of sexual assault is often distrust, a loss of control, a profound need for privacy and a need for restoration of boundaries.

In the spirit of Sexual Assault Awareness Month, here’s what I commit to asking:

I ask because I believe in restoring dignity and returning control.

I ask because I make a commitment to real support on the terms of the survivor.

I ask because I know that everyone’s trauma experience is unique and I don’t get to substitute my opinion for their reality.

As we go out among the hidden survivors, let’s all remember to “ask” – to restore dignity, respect boundaries and return control:  to support the survivors wherever we find them.